Thousands of classic car fans were treated to a stunning display of vintage vehicles at a coastal rally.

The third annual Tynemouth Classic Volkswagen Rally featured a string of campers and vintage vehicles on show at Spanish Battery and Priors Haven.

More than 6,000 people are estimated to have attended the event on Saturday.

Jill Snailham, rally organiser, said: “We had a fantastic turnout.

“The show vehicles were pre-1984 air cooled Volkswagens, which had come along from all over the country.

“There were some amazing restored cars to see and it was a great sight.

“And the weather on the day was absolutely brilliant, which meant that a lot more people were able to come along and enjoy the event.”

The public was able to vote for their favourite car and camper as well as taking a look at previous winners displaying their trophies.

Von Kev, artist and graphic designer, said: “We all work really hard to ensure the success of the show.”

The Hymer VW campervan – called the Cape Town – joins five other all-new campervans – the Rio, the Sydney, the Grand Canyon, the Yellowstone and the Serengeti – which are built on the Fiat Ducato.

The campers have been designed and built by a new division of Hymer – called HymerCar – that has been created to allow the manufacturer to get a foothold in the growing European campervan market.
The new VW HymerCar will come to the UK next year, although left-hand drive models are already available and British dealers have already placed orders.
The VW Cape Town features a double bed that can be easily made up and sits across the cabinetwork. It also features a unique pop-top rising roof that has a double joint at the rear so it allows for walking room inside when the ‘upstairs’ bed is not in use. In addition, Hymer has created a clever bicycle-carrying system for the new VW campervan The public will be able to view the new HymerCars, including the all-new VW Cape Town, at the October NEC motorhome show. While prices have yet to be confirmed, expect the new VW Hymer to cost in excess of £50,000, which puts it in the same price range of the VW California.

You can read more about the new HymerCar campervans in the August issue of MMM magazine, which is on sale now. This issue also contains a FREE campervan supplement, which has details of campervans and manufacturers in the UK.

In addition, the September issue of MMM magazine, which goes on sale on 22 August, features an exclusive interview with the managing director of Hymer about his plans for tempting more British buyers through his dealers’ doors.

MMM is available as a digital magazine for just £2.95. Click here for more 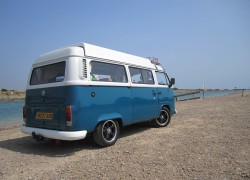 There is nothing cooler than a VW T2 Camper Van and so we borrowed one from classic-campervans.co.uk who operate out of Classic Car Club London’s N1 base for the weekend to find out exactly how cool.

Ice cool, as it turns out, judging by the waves, positive feedback, adulation and general interest our 2007 Danbury converted camper generated. Whether it was the history of these iconic vehicles that incidentally celebrate 64 years of continuous production in 2013, more on which later, cool blue hue, lowered stance, smart interior or sexy alloys isn’t clear. Everyone, young and old wanted to chat, touch, look inside or simply know more. This really was the classic car equivalent of getting a puppy; a people magnet with a very strong pull. 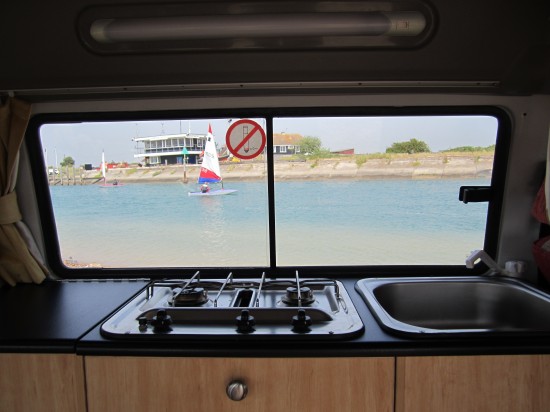 Enjoying the view from our borrowed T2

That when you think about it is a little odd, given that the VW Type 2 (T2) was originally an attempt to re-use the VW Type 1 (T1 or Beetle) platform in a more practical way, the brainchild of Dutch car importer Ben Pon in 1946. Three years later in 1949 the first split windscreen T2’s appeared and eight years after that in 1967 the first ‘Bay’ front window vehicles started to be produced. Something that continued in Germany until 1979 when production swapped to the squarer looking T3, Mexico until 1994 and amazingly Brazil until the end of this year (2013). Danbury and others will be forced to convert second hand vans after all of the new stock has been consumed. Another interesting point, all camper vans were and continue to be today converted Type 2 buses, albeit originally offered as new in partnership with specialists such as Devon and Westfalia, the latter often referred to as ‘Westies’. 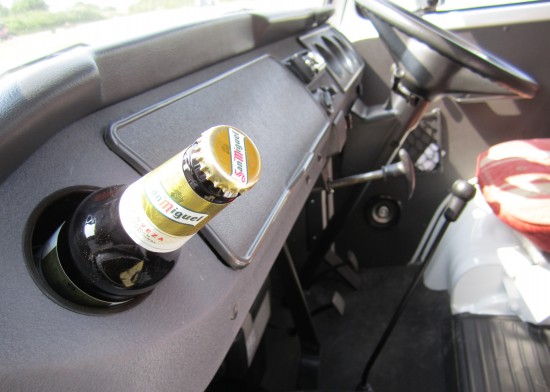 The question remained, how does a converted utilitarian commercial vehicle dating back to shortly after the second world war win over the hearts of so many people and for so long? Well, being frank judging by our two days experience it can’t be about practicality, the inside is cosy at best, or comfort whilst on the move, it is after all quite noisy to pilot, and it certainly isn’t about decent cross-country pace because 55-60mph is as fast as you dare without running the risk of blowing the engine up. Worse still travelling above 60mph tests not only your nerve, but also the ancient and heavy powerless and somewhat vague steering as well as rudimentary suspension to the extreme as the T2 bounces and weaves its way along the highway. There are alternatives on the market that tackle all of those points in a much better way, but then they’re not the reason you and so many others like you want a T2 so badly. Because just like getting that puppy, buying a converted VW Type 2 Bus is much more a lifestyle choice. 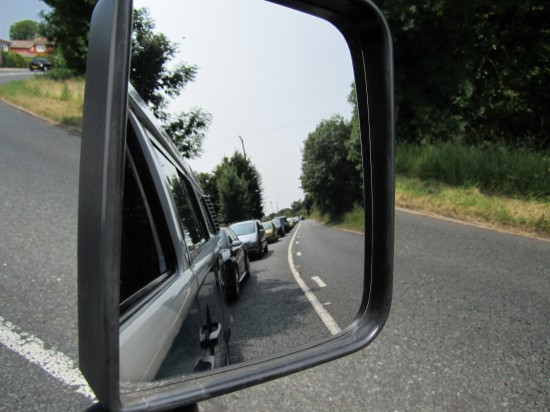 In a T2 there’s usually a queue

I dwelled on the why all the time we had our van and the word that kept coming back even with a contemporary conversion like this 2007 Danbury was ‘simplicity’. These vehicles are like life stripped right back down to the bone. There is no fat, or waste, just an honest attempt to transport up to four people around with luggage, feed everyone and then accommodate them overnight. The additional two needing to be children really as the extra sleeping spaces involve hammocks or relatively thin flooring that make use of the elevated roof space. For two adults that same space can be used for the luggage previously stored in the boot and forced to move in order to make way for the bed, an arrangement that works perfectly well. So much so I challenge anyone to find a more romantic way to spend a weekend than tootling around in a T2 stopping only when you want to, which on the glorious weekend we had was to watch the sun go down whilst enjoying that naturally chilled bottle of beer. 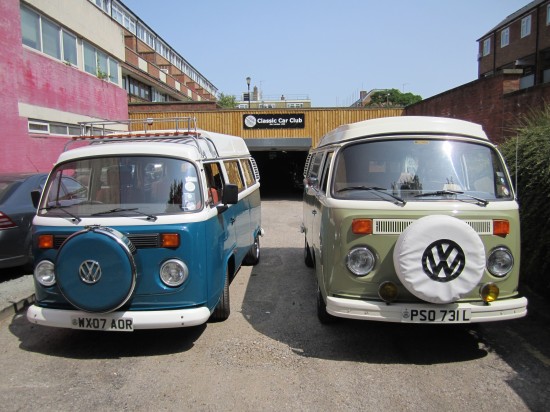 If you’re interested in some other minor Camper Van blah-blah then be aware that the later Brazilian built T2’s moved away from the infamous air-cooled flat four engine to a more modern Polo water cooled in-line four unit around 2005-2006. That those same sourced vehicles may require protecting to prevent them rusting away whilst removed from their far drier climate. All will need a heater adding, our Danbury had a Webasto unit retro-fitted, and all will have been converted from left hand drive and so the sliding door on the side is to the right and not kerbside in the UK at least on the left. Other than that the newer vehicles should have a tidier and possibly more practical interior with a cleaner layout that includes essentials like a small fridge. This as opposed to an original not so cool, ‘cool’ cupboard one owner showed us on their ’74 Devon for instance.

Choosing one of these vehicles carefully is particularly important because much like a puppy or in classic car terms say a Morgan 3 Wheeler (M3W) it might not be for you. Puppy’s take up a lot of time and energy and M3W’s are difficult to get in and out of, offer no weather protection and are extremely noisy to drive. Camper Vans offer similar challenges, being tight on space inside, slow and noisy to travel in (motorways being most tricky given that foreign registered trucks are not restricted to 55mph) very expensive to buy new, or requiring a lot of time and energy as a second hand proposition. If you are in the market and haven’t experienced one previously our plea is to try before you buy because after all much like puppy dogs Camper Vans are not just for Christmas, they’re for life. 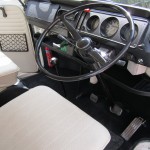 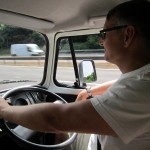 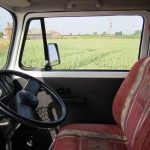 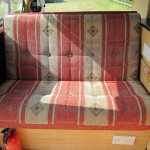 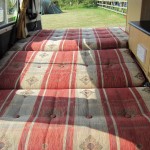 Seat Down for Bed 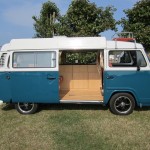 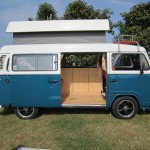 Or up not to bang your head

How does this car make you feel?

In one word: Hippy

As a favourite meal: BBQ chicken washed down with a bottle of beer nicely chilled on the journey down

Anything Else: Such simplicity in the complex world we live in today is still very refreshing

This 1957 Samba, was pushed into a lake in Norway by a local hotelier when its gearbox failed in 1974. Thirty years later enthusiast Morten Lund learned of the drowned Volkswagen and hired a remote-controlled submersible to search for it, discovering the Microbus lying face down at a depth of 15 metres. Undeterred, he hired divers and a mobile crane and lifted out his catch last summer. Now Lund faces an equally mammoth task restoring the Volkswagen to road-going condition. The determined and hugely optimistic enthusiast excitedly told Practical Classics magazine: “It took me less than 30 minutes to get both front wheels rolling, and the steering works perfectly… The cargo floor and cab are nearly rust free – just some minor holes around the edges.”