The Obscure Art of Energising Your Dynamo

The circumstances that have led me to write this article happened a few years ago now, but it has since occurred to me that the solution to my problem was actually quite difficult to find and so I hope that this will help spread the word to the more hands on DIY mechanics amongst us.

We live in Manchester and one summer we went on a trip to Silloth in Cumbria with our three children in Nancy, our ’68 Bay window van.

On the way to Silloth I noticed the red light come on in the instrument panel. This meant there was something wrong with the electrical charging system on the van. Given that we were nearly at our destination (139 miles according to Google Maps) there was no way we were turning round so we completed the journey there and had a lovely holiday. I chose to worry about the problem on the way back as we have AA Relay cover and so would get home one way or the other.

To begin the journey home we jump started the van in order to minimise the drain on the battery using the jump leads I always carry. It started up no problem and we went on our way. We had to stop for petrol on the way home which was unfortunate, but it started off the battery at the next services so we carried on our way.

The red light stayed on all the way home and the voltage reading slowly dropped on the cab mounted volt meter and to make matters worse it was starting to go dark.

As we hit the M60 I put on the lights. This caused the van to die as (presumably) no spark was being produced in the engine but it fired up again when I turned the lights off so we had to drive the last five miles or so without lights (not recommended but needs must).

We got home without being pulled over by the police or any further incident and the next weekend I set about trying to sort out what the problem was. On investigation I found that the generator/dynamo was dead. 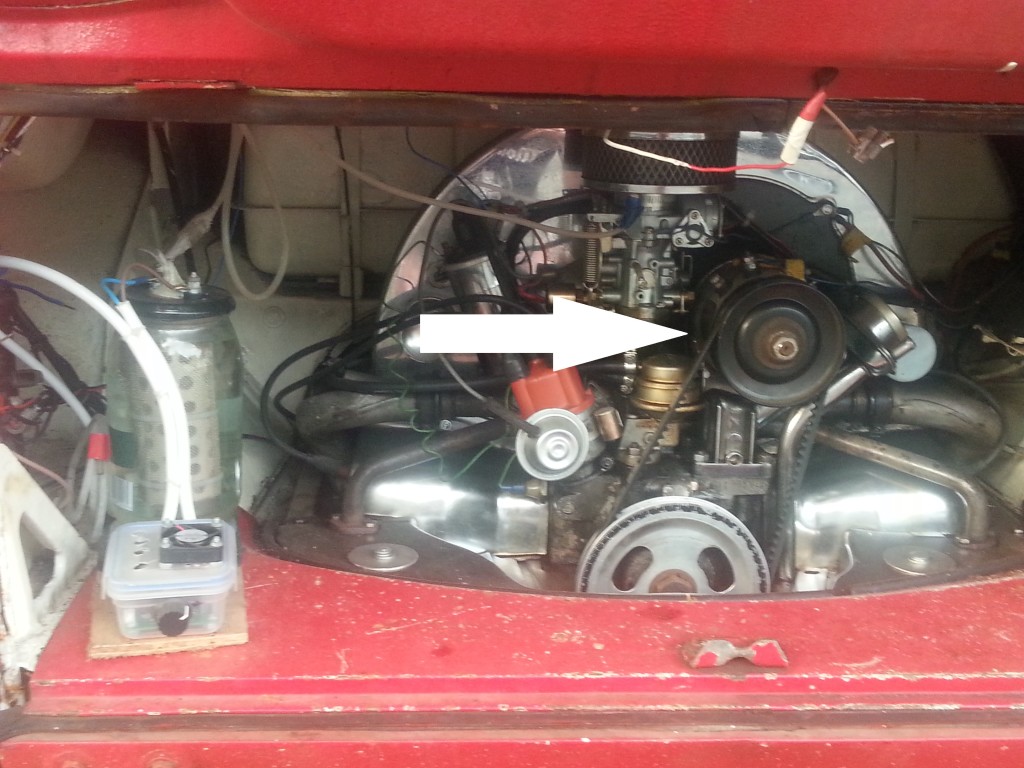 It is a simple enough job to replace the generator, so I went about this myself and it was an afternoon’s job for a DIY mechanic to do.

I started the van (after trickle charging the battery) and the red light was still on. Disaster! What had I done wrong? Was the new generator faulty? Would I need to take it to a garage? All these thoughts ran through my mind so I packed up for the day and started researching what the issue might be.

At the time I only had what is considered to be a bible for many car enthusiasts – the Haynes manual. This didn’t mention anything that I hadn’t done and checked when I fitted the new part. This baffled me further and so when talking to friends about the problem, someone mentioned (eventually) whether I had energized the dynamo. This was news to me so I started to search for the term on the internet. I eventually came across the term polarizing the generator which seemed to be a more universal term.

Rob and Dave’s Air cooled Volkswagen Pages has the following to say on the matter of generator polarisation/ energising.

Note: Why do generators need to be “polarized”? Automobile generators need some magnetism to get started. This “residual” magnetism remains in the field pole pieces even after the engine has stopped. The next time the generator starts up, the residual magnetism creates a small voltage in the armature windings. Not enough to charge the battery, but enough to allow the field windings to draw current. As the field current increases, the pole pieces create even more magnetism. That makes even more voltage in the armature, and the cycle continues until the generator is capable of producing maximum output.

What happens though to a generator which has been stored a long time or is freshly rebuilt? The residual magnetism may have decreased to the point where it can no longer get the generator started producing voltage. In the case of a new generator or one which has been mis-treated, the residual may even be of the wrong direction (North and South poles reversed). Polarization is a simple process used to restore the field pole residual magnetism and ensure the magnetic direction is correct.

Note: Don’t run the generator this way for more than a few seconds to avoid overheating.

Put the fan belt back on and re-test the generator voltage with the (DF) terminal grounded. If the output voltage is still low, the generator is defective. 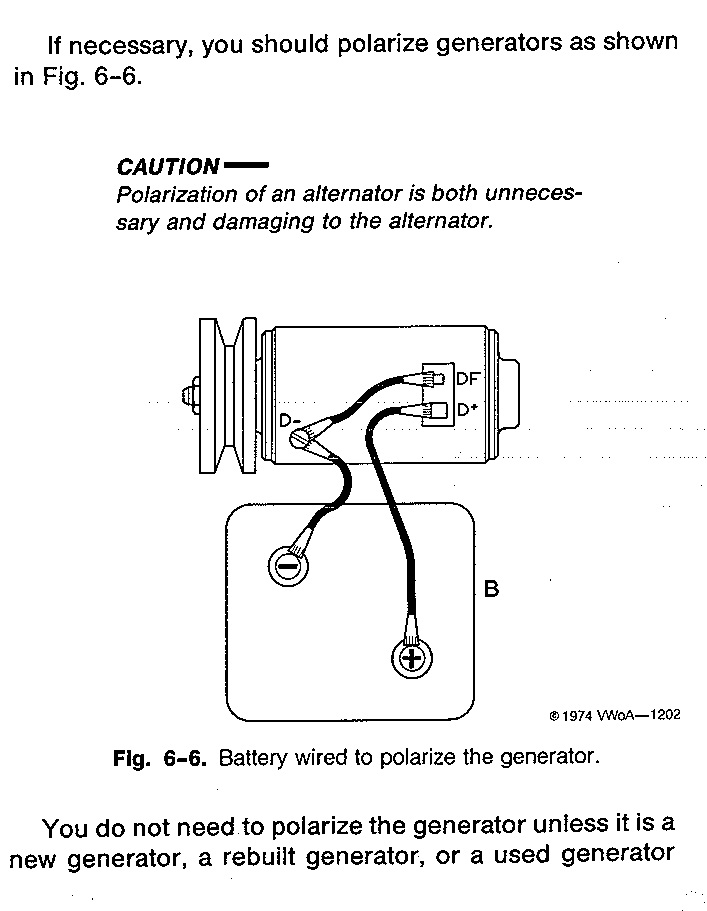 This picture shows the suggested wiring set up for polarising the generator from Bentley’s Volkswagen Service Manual Type 2 – 68-79.

Alternators do not need to be polarized. Alternators use a trigger current to start the process of charging – electromagnetism, so don’t need any internal magnetism to begin with, like a generator does.

That trigger current is supplied via the alternator dash light (it’s a tiny current and won’t make the light glow when the engine is running) so if that bulb blows – the battery won’t get charged and it will go flat. Curious circuitry VW used, but it works just fine. So that means that with an alternator equipped VW, you should always glance at the dash as you turn the key and make sure the Alt light does glow with just the key on, just to make sure that that circuit is intact.

I performed the task suggested, and lo and behold! I started to get a voltage showing on my volt meter in the van dashboard. Job done…. or so i thought…

A few weeks later, the volt meter showed that the voltage was not as “normal” again. This time the tests on the generator showed it was generating voltage, and further tests eventually traced it back to the regulator this time. I think the increased efficiency of output of the new generator tipped the regulator over the edge and burnt it out in the time the two were together. Again, a quick afternoon job buying and replacing the regulator did the trick and I have had many miles of happy service since then. 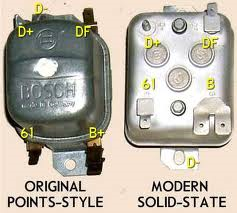 In summary, I think the above information is vital for anyone replacing an early type electrical charging part on their van but is very little publicised. A simple extra but obscure task can make the difference between success and admitting defeat and can save several hours paying a mechanic. I hope you think it’s useful too.