Many of us suffer from that indistinct, rather sloppy gear change. In fact, fixing it is a bit time consuming and will make you a bit oily but is not as tricky as you might think.

This video is for a VW Beetle but a split screen, early Bay, late Bay, type 25 and type 3 all have a similar mechanism. Buy the right parts, have a wire brush and some degreaser like Gunk handy and it can transform you gear changes!

For VW Microbus enthusiasts, the 23 window Microbus is considered the Holy Grail. Today, we are sharing a very special unicorn: the world’s only 1965 Volkswagen Microbus stretch limousine, complete with 33 windows as well as a ragtop sunroof.

The one-of-a-kind Microbus was custom built by a VW-only restoration garage in Southern California (where else?) and took two years to complete. The result is stunning: the India Ivory-on-Tropical Turquoise bus features safari windows, front and rear; 14 side pop-out windows with large spoon latches; chrome front door frames; polished trim pieces on beltline and bumpers; and original 15-inch “crows foot” wheels in a white powdercoat.

The cabin is undoubtedly the VW’s party piece. The Volkswagen Microbus stretch limo features two-tone brown benches with white piping and hidden pleats, which seat up to 12 passengers. The Microbus also boasts a custom wood floor, wood interior, and a high-end sound system featuring 6 JBL speakers, an Alpine amp, and Alpine head unit. RGBW LED light strips run across the entire length of the interior of the bus and can change to any color!

Following the extensive two-year restoration, the stretch Microbus finally arrived to Maui, Hawaii (where else?), to enjoy its new life as a special VIP limo for Endless Summer Limousine. Maui is long known as a popular wedding and tourism location with over 7,000 weddings booked every year.

Unfortunately, a sudden family emergency will require the owner and operator of Endless Summer Limousine to relocate, which means leaving the Microbus, the business, and the island behind. According to the eBay listing, the beautiful Microbus sold for $220,000. Despite the astronomical price, we’re sure it is money well spent for the right owner.

Who wants a princess bed when you can have an awesome VW camper van replica to lay your head down in?

Reddit user inexplorata, aka the world’s number one dad, built his daughter this incredible bed-cum-playhouse for her third birthday after he saw an ad on Craigslist for free VW Beetle parts – namely, a bumper, hubcaps, and some interior door pieces.

After picking up a $30 bunk bed, also on Craigslist, the enterprising dad set to work.

The construction, as detailed on his blog, took him four months.

He did have the occasional extra pair of hands.

The build cost him a total of $100, or £65 (much cheaper than those custom-made kids’ furniture places charge we’re guessing).

The camper bed has working headlights and a horn that makes driving sound effects.

It also has a colourful 60s style decor, as befits the iconic van’s hippy heritage.

As well as a hammock. Obviously.

And one careful owner.

Ever wanted to buy a split screen VW camper van but don’t know where to start? 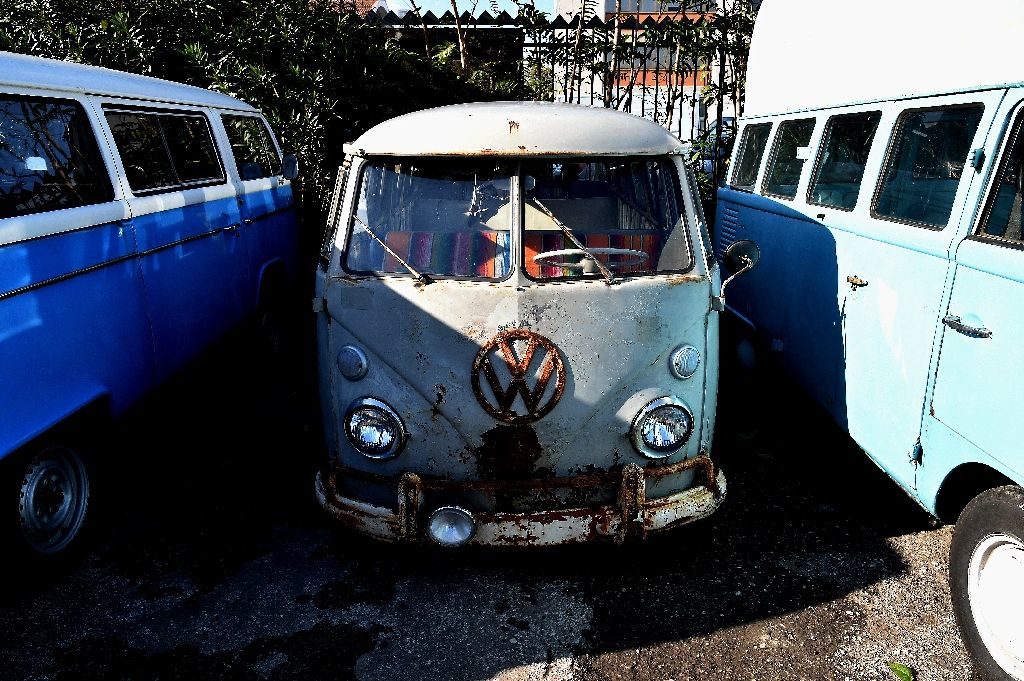 Here is a short video on how.

The Type 2 Owners Club welcomes all transporters from this Type 2, T1 (the split screen) up to the current T6 and the planned id Buzz.

Here is a short video on a group of friends who rescued a split screen from a Swedish forest.

A Volkswagen campervan thought to be the first and oldest in the UK is expected to sell for more than £75,000 at auction.

The vehicle is the first, and thought to be the only surviving, VW Type 2 Samba Microbus imported into the UK.

The right-hand drive bus, built at the original VW factory in Wolfsburg, was delivered new into the UK in November 1955 by John Colborne-Barber, the founder of the first ever VW dealership in the UK.

Sambas were never officially imported new into the UK, and as such ‘SGP 62’ is thought to be the only surviving example of the few Wolfsburg-built Type 2s in the country

After the end of the Second World War, La-Haye, who was stationed in Germany

, purchased three new Volkswagen Beetles, the last of which he returned to the UK with.

Colborne-Baber showed an immediate interest in the Beetle and made George an offer on a part-exchange for a Wolseley 6/80, which he accepted.

Colborne-Baber was so impressed with the Beetle he’d acquired, that he then approached Volkswagen in Germany and began importing Volkswagen vehicles into the UK in 1949

Mr Colborne-Barber, who started selling VWs after falling in love with the Beetle, imported the car from Wolfsburg and converted the interior so he could take it on family holidays.

He had the unmistakable motor fitted with a fridge and stove by renowned specialists Devon Conversions.

The car dealer held onto the campervan until the early 1960s. It then disappeared for the next 30 years until it was rediscovered in 1992.

It has been comprehensively restored to original specification with a few additional safety and convenience features, whilst retaining its completely original appearance.

The iconic camper will be sold at Silverstone Auctions’ Race Retro Sale, which takes place at Stoneleigh Park, Warwickshire on the 21st and 22nd of February.

of Silverstone Auctions, said: said: “This is a fantastic piece of Volkswagen history and as such we expect a lot of interest when it comes up for auction.

“These vehicles are hugely popular around the globe and collectors are now paying some incredibly sums for them.

“This is a beautiful and rare Samba Microbus, historically important in terms of its VW legacy in the UK. It’s ready to be appreciated and enjoyed and I hope the new owner will love it just as much as the Colborne family did.”

In 1992 ‘SGP 62’ was rediscovered in the West Country after 30 years in storage. It has been professionally restored over the last 18 months as a faithful reproduction of its condition as used by the Colborne-Baber family but with a few additional safety and convenience features whilst retaining its completely original appearance.

A new bespoke period-correct Devon interior, modelled on the design that was enjoyed by the Colborne family, was created by VW expert Kevin Morgan – including an correct Osokool fridge and Dudley stove.

These rare items were sourced specially for this bus and are in mint condition. The vehicle also comes with a certificate of authenticity from the Stiftung Auto Museum Volkswagen as well as a personal letter from the son of Mr Colborne-Baber regarding the bus.

This 1957 Samba, was pushed into a lake in Norway by a local hotelier when its gearbox failed in 1974. Thirty years later enthusiast Morten Lund learned of the drowned Volkswagen and hired a remote-controlled submersible to search for it, discovering the Microbus lying face down at a depth of 15 metres. Undeterred, he hired divers and a mobile crane and lifted out his catch last summer. Now Lund faces an equally mammoth task restoring the Volkswagen to road-going condition. The determined and hugely optimistic enthusiast excitedly told Practical Classics magazine: “It took me less than 30 minutes to get both front wheels rolling, and the steering works perfectly… The cargo floor and cab are nearly rust free – just some minor holes around the edges.”