CAVEAT: brakes are obviously safety-critical components, so only attempt this job if you are confident that you can do so safely! This is a personal account of a process and not an exhaustive set of instructions; the author cannot be held liable for any injury arising from accidents caused by a failure to carry out safety-relevant tasks properly.

Some while ago, in that pre-Covid world in which we could drive places (remember that?), I started to become aware of a tell-tale grinding noise coming from Mortimer’s nearside front wheel. There still seemed to be adequate braking power, nor was the van pulling particularly in either direction when I applied the brakes, so I wasn’t unduly concerned. But I thought I’d take advantage of the lockdown to jack him up, whip off the wheels and take a look at the callipers and brake discs. 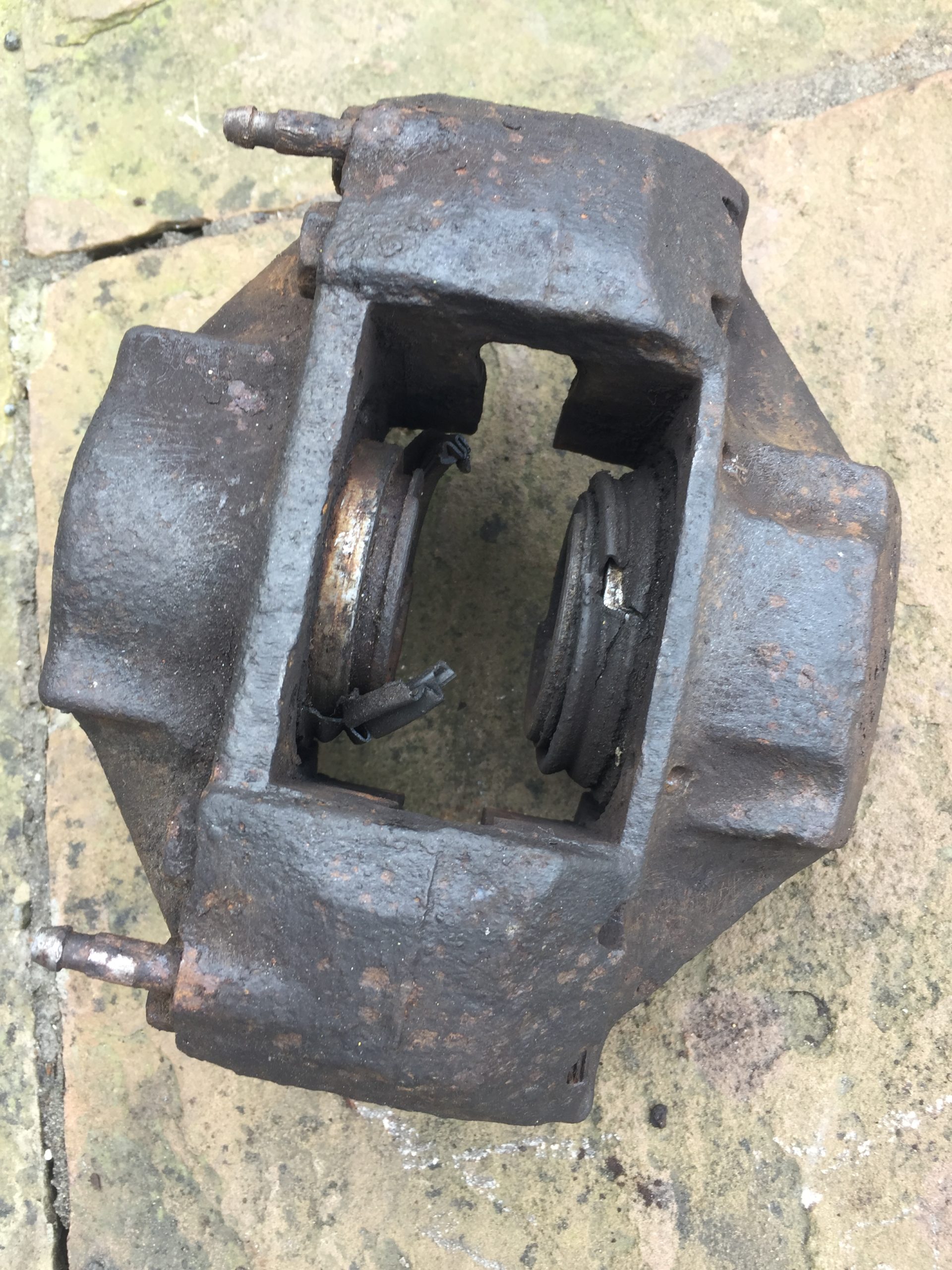 You can imagine my horror when I saw that, in the first assembly I looked at on the nearside, the calliper pistons were frozen in such a way that the brake pads must have been forced up against the disc surface. The pistons normally only protrude slightly from the inner surfaces of the calliper, allowing enough space to snugly fit the two pads with a tiny bit of clearance. But as  you can see on the picture, the dirt seals – concertina boots that should move in and out with the piston and protect it from contamination – had long since perished and the pistons had accordingly seized up in extended position. On closer inspection, it also became apparent that there was zero friction material left on either pad(!) – what I was hearing was metal on metal. Whatever braking performance there may once have been was obviously a thing of the distant past! The disc surface was as scored and uneven as you would expect under those circumstances, and the disc was obviously beyond redemption. Things were a little better on the other side, with some wear left on the pads – although the fact that van wasn’t pulling to the right suggests that that brake wasn’t functional either. I toyed with the idea of trying a rebuild but, when it became evident that there was no way I was going to get the bleed valves free, I thought I might as well save myself a lot of bother by buying new callipers for both wheels along with two new discs. 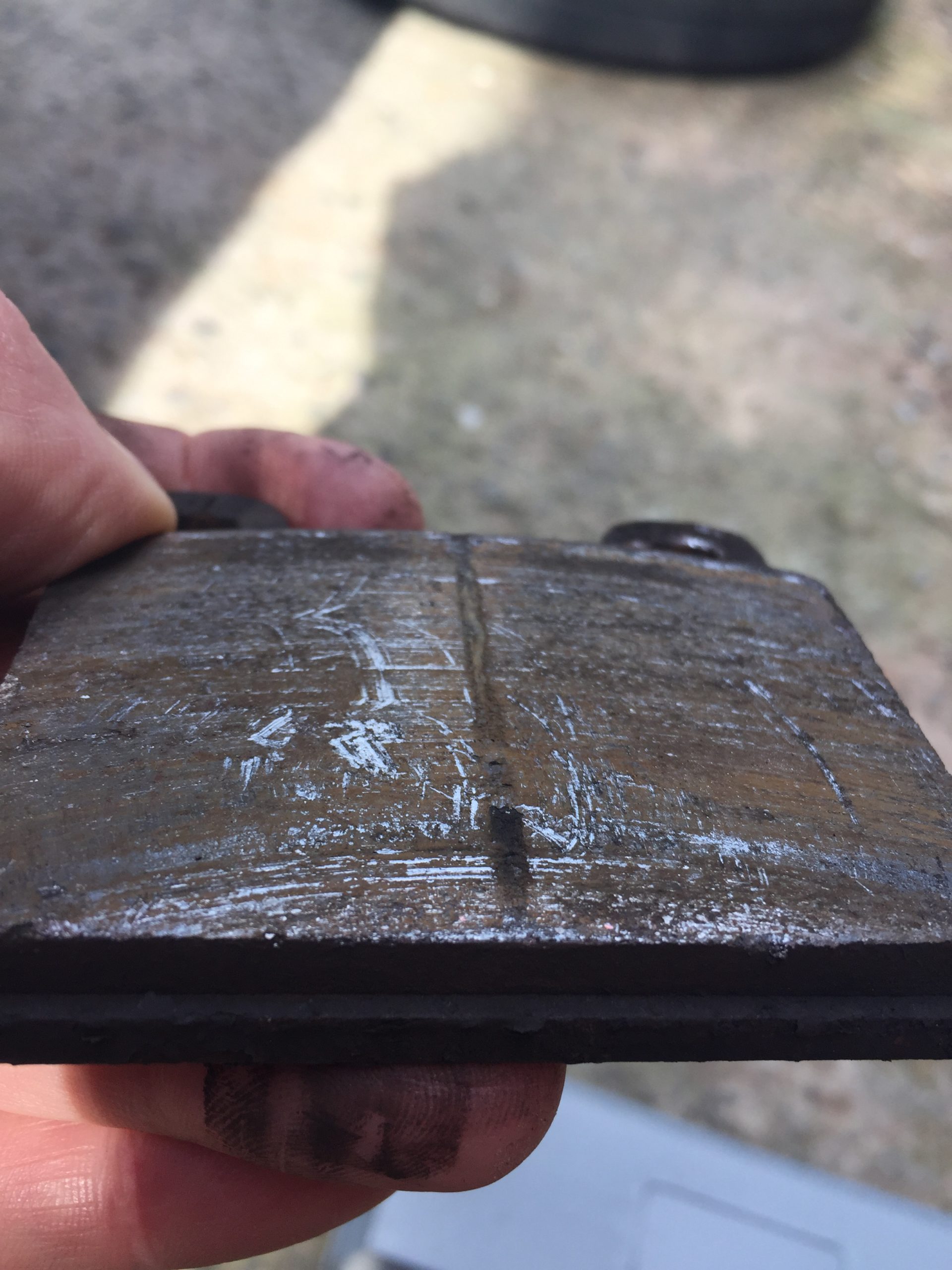 The first job, of course, was to get the old callipers off so I could remove the discs. This was relatively straightforward. I first had to undo the two 17mm retaining bolts on the inside of the assembly. I then used a pin punch to knock out the two pins that hold the retaining spring in place before tugging out the old pads. It was then a question of pulling out the clip that holds the hose in place and removing the whole assembly from the disc, being careful not to place undue strain on the metal brake pipe that attaches to the calliper. I also needed to bear in mind that the topmost bolt has an unthreaded section on the shank closest to the screw head. The nuts were pretty tight, however, and I needed a torque wrench to get them off. According to the BUSARU guy, the torque is about 110 lbs. 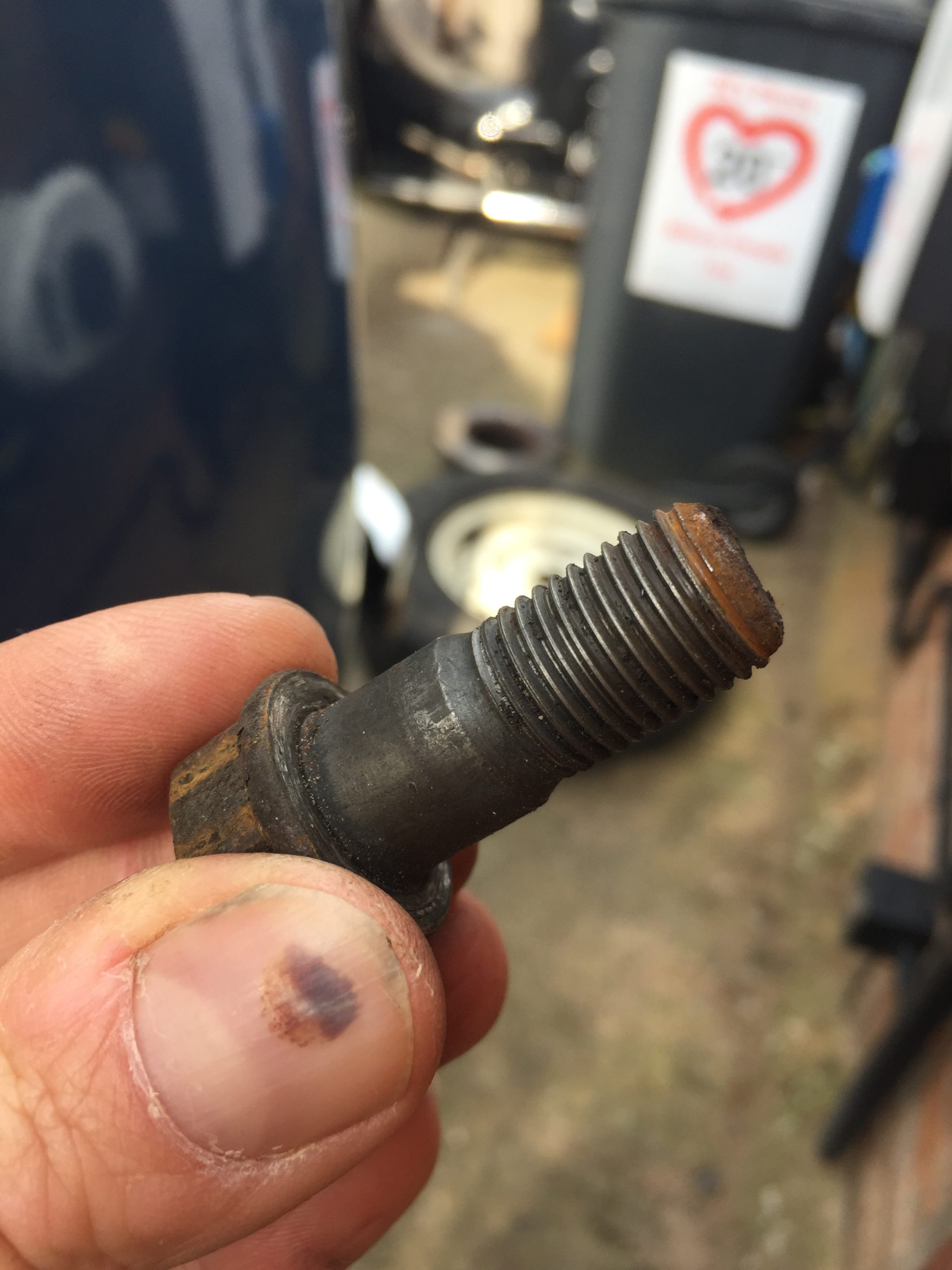 The tricky part in getting the discs off was removing the two button head Allen bolts. Stopping the drum from rotating was an issue until I had the brainwave of clamping the disc to the backing plate. I managed to free up one bolt on each side by conventional means but soon found myself in danger (of course!) of irredeemably rounding off the holes in the other two in my desperate attempts to get them to budge. I even resorted to cutting a groove into one of them (and the surrounding metal) with a grinder to create a slot for a screwdriver. But nothing could persuade it to move! A quick appeal to the Samba revealed a range of opinions on the subject, from just drilling the heads off (the logic being that the thing was securely held in place by the wheel anyway and wasn’t going to go anywhere) to using an impact driver. I like to do things properly if I possibly can, so it was off to eBay to get myself an impact driver (can’t believe I’ve never owned one!). And, hey presto, a couple of whacks on each side got the troublesome little critters out. I took a quick look at the condition of the bearings, which seemed fine and well-greased, so I left them alone. I then fitted the shiny new discs to both sides. 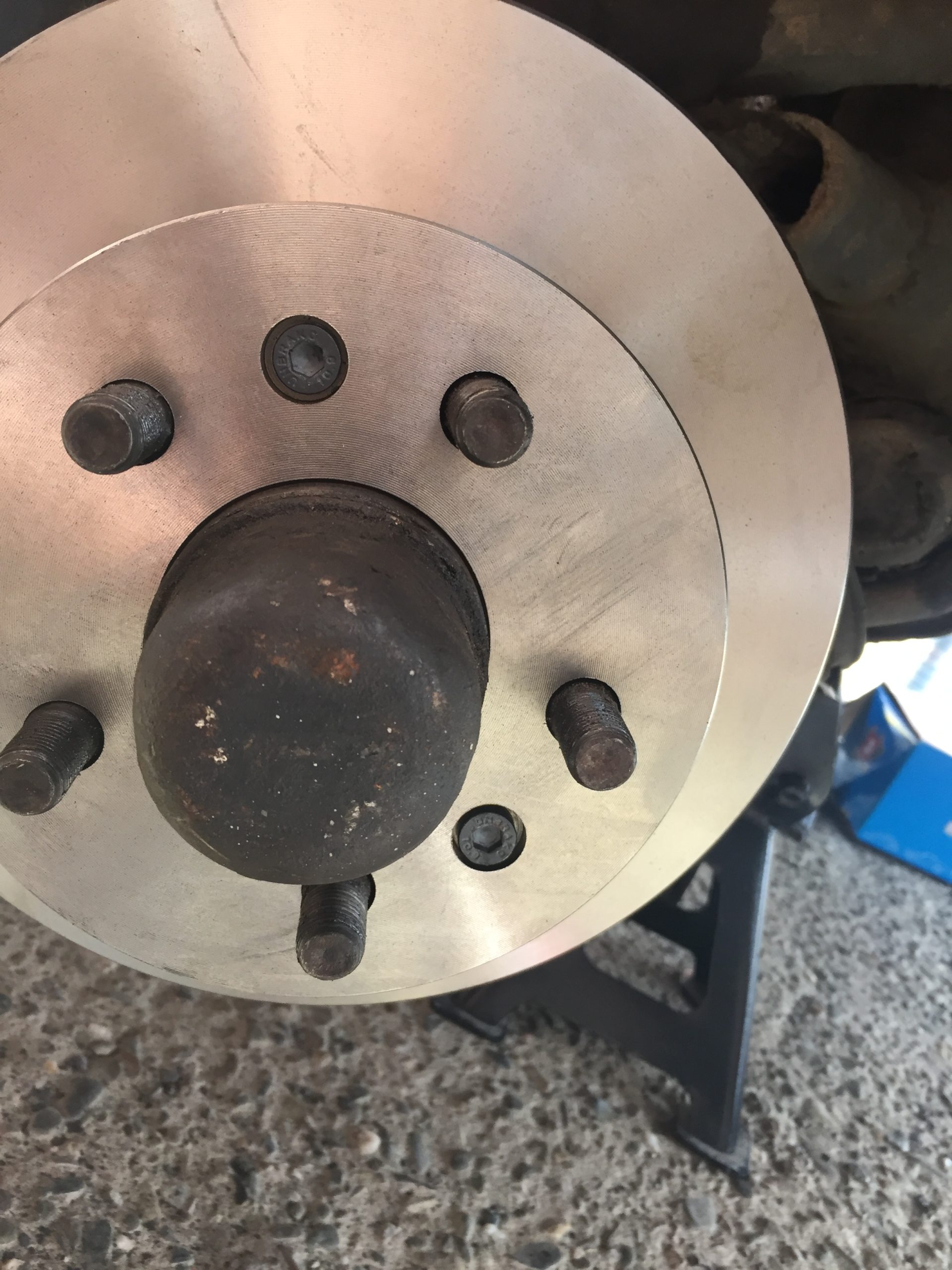 The next job was to disconnect the old callipers from the brake lines. Now, as the brakes are safety-critical parts, I’d always shied away from doing anything that would involve having to refill and bleed the fluid. But, having watched a number of YouTube videos on the subject, I concluded that I had nothing to fear but fear itself and went ahead. It would have been a good idea to apply some WD40 to the nuts first, though: on one side, the pipe started to twist with the nut (which should normally spin freely around it), which promptly sheared off. So it was back to Just Kampers for a new 24-cm brake pipe (I swear I’m keeping that company afloat single-handed at the moment!). 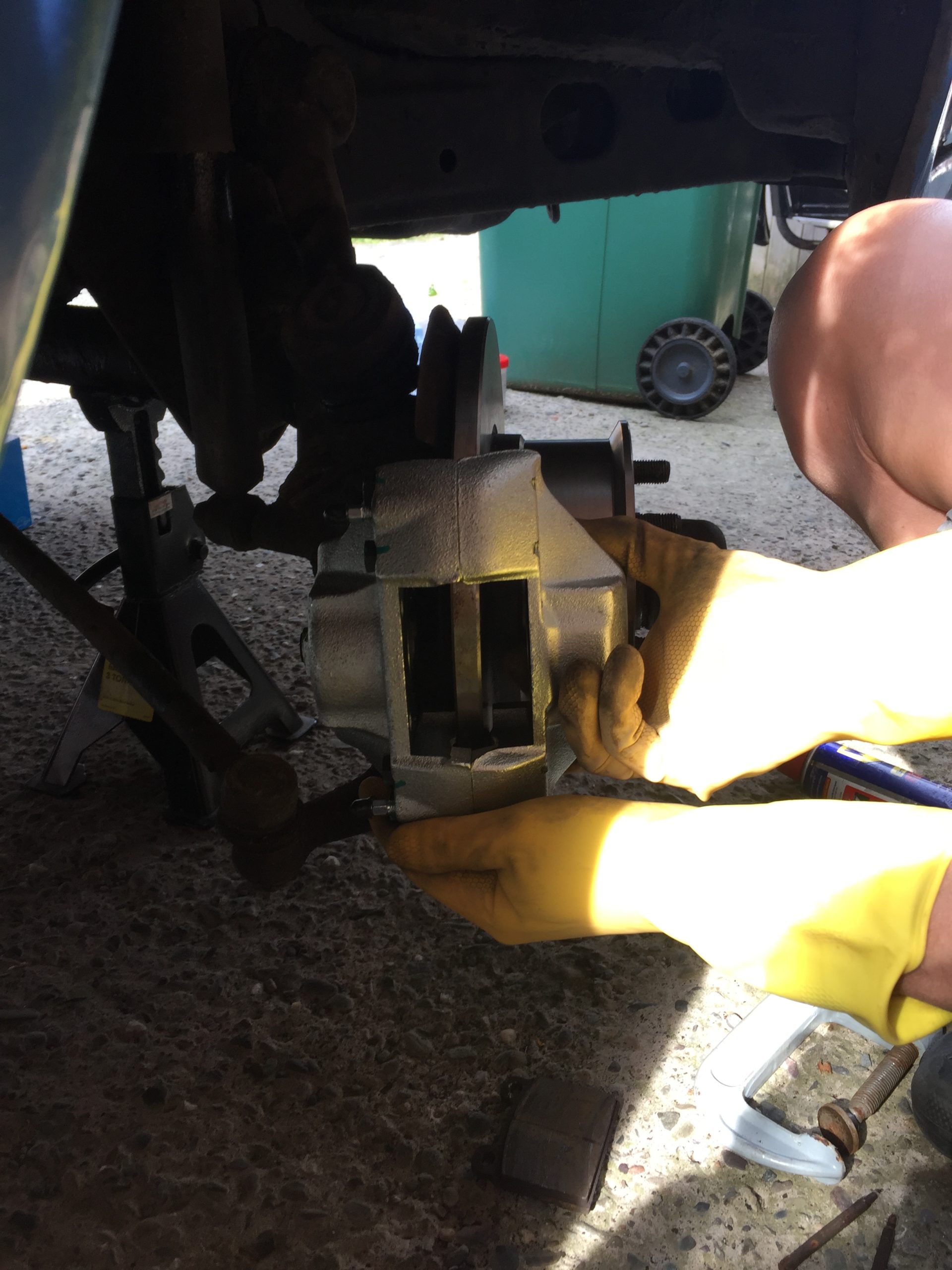 Offering the caliper to the disk

With the old units out of the way, it was just a matter of fixing the new ones in place, torqueing up the bolts, and sliding in the new brake pads and backing plates, having first applied some anti-squeal gunk to both sides of the plates. Once they were both in, it was the turn of the retaining spring and the two pins (here I reused the old ones because the new pins supplied with the kits resisted my efforts to tap them into the holes). I used a pin punch and hammer to tap them home. 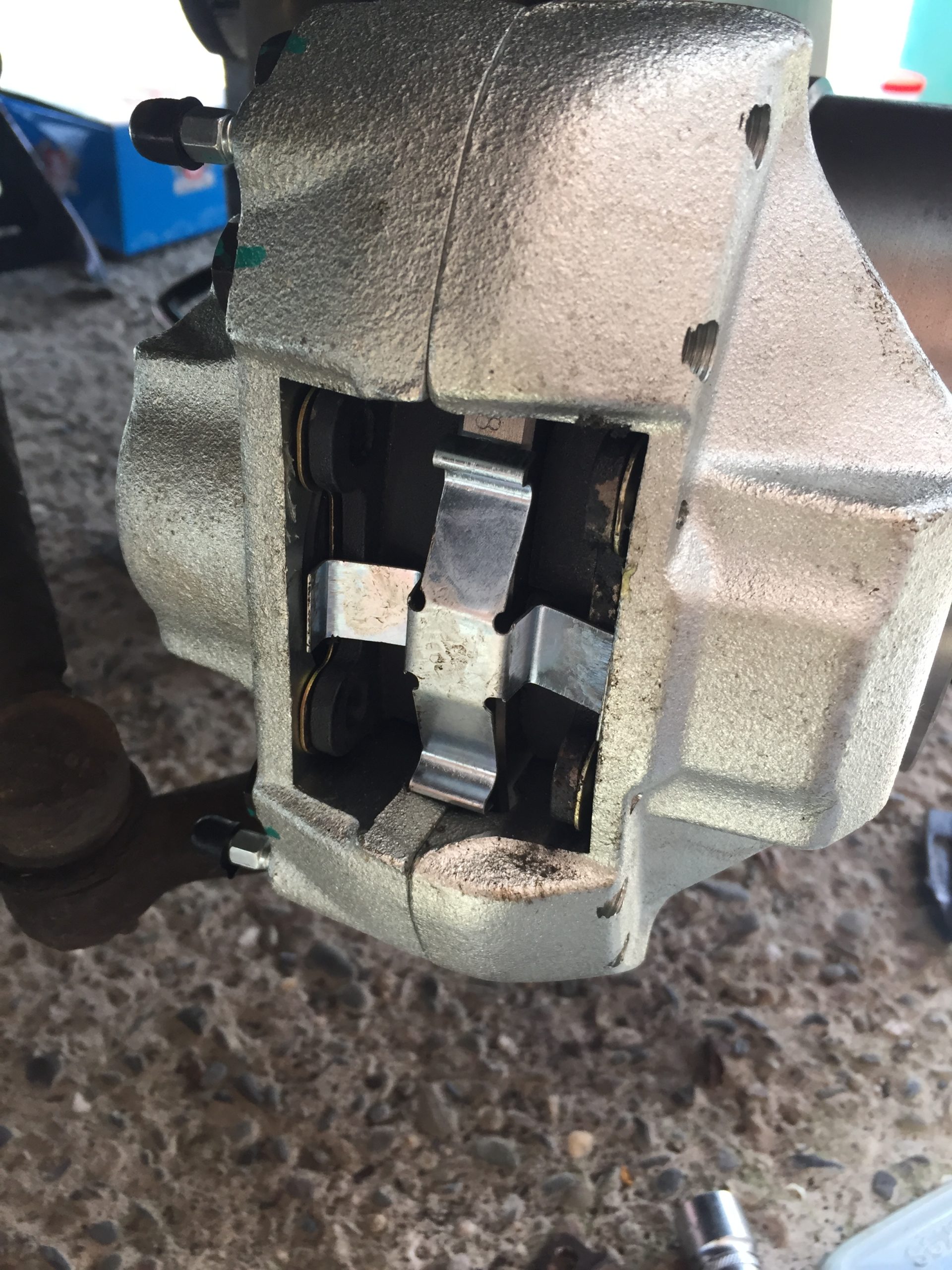 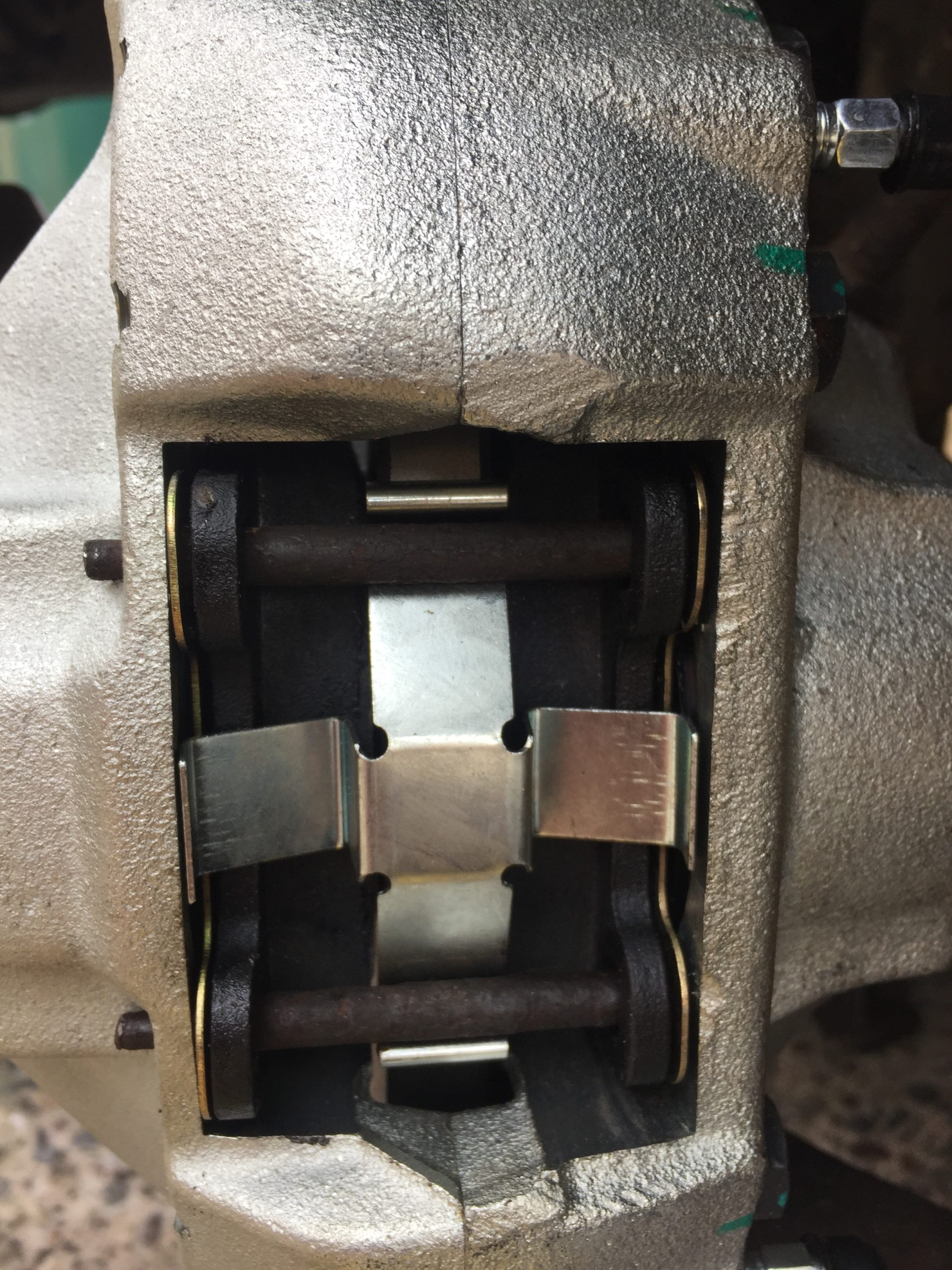 The new caliper in place

Then it was just a question of bleeding the brakes, replacing the wheels and venturing out for a short road test (keeping an eye out for the police – strange times!). Job done!

Kit acquired for the job: