Once again, no warranty or responsibility is given, offered, or implied from information contained in this article.

For those of us in sunny (ish – I live in the UK, there are limits) countries, who like to go away in our vehicles and who use 12 volt electrical items, solar charging is now possible. In fact, it is quite easy with a small amount of reading and hopefully this article will help.

Now, convert the amps to watts by multiplying by 12 if you only noted the amps.

Then add up all those little watt hours to get a total for the day. In this example I get 780 watt hours. It doesn’t really matter what that means, just get the number!

In the UK I think we can get 6 hours of sunshine per day in the summer and 4 hours in spring and autumn (fall). Your country may be different and your feeling might be different.

Therefore to replace the lost charge I need a solar panel that has an output of 120 watts. If you need more than 100 watts, consider more than one panel.

The solar panel itself

They come in 3 main flavours, choose the type you prefer!

We purchased a 100 watt solar panel that is “semi flexible” meaning it is about 2mm thick and bends a little but bending too much will break it. We used a Biard panel but other manufacturers are available and the price was around the £130 mark for the supply only of just the panel but this was in 2015.

We then purchased a used roof rack and connected it at the back of our bay window to the roof gutters with a little modification as roof racks are generally lower and narrower than a Bay window needs! It did cost £4 ($6) though!

As an expedient, we laid the panel on the grass upside down, laid the roof rack on the panel also upside down and gaffer taped the two together. It was a plan for a couple of months before glueing the panel to the Dormobile roof and 3 years later it is still gaffer taped!

The clever box in the middle

You cannot just wire the solar panel to the leisure battery – bad things will happen. You need a box in the middle that will stop the leisure battery sending its charge out through the solar panel into the night. It stops the solar panel over charging the leisure battery so far that it explodes. You need to avoid that. This clever box is called a regulator or solar controller and comes in 2 main types – PWM (pulse width modulated) and MPPT (maximum power point tracking). The PWM is less efficient at getting power out of the panel into your battery but is generally a lot cheaper. MPPT would be recommended if you camp outside summer as it is more efficient in less than full sunny days or if you have more than one panel. Do not buy an MPPT controller under about £30 as they tend to think they are MPPT controllers but are just expensive PWM controllers.

The clever box for us was a cheap PWM controller that was about £10 / $15 and has just 3 lights. Charging, discharging and battery health (green is good, flashing is full, red is bad). This has since been replaced with a Renogy MPPT controller.

We dropped the solar panel cables down the air vent at the back so that there are no new holes on the van and therefore no chances of a water leak! Then got the wires up next to the spare wheel inside the vehicle as the controller is easier to see and that engine bay can get quite warm.

Then the solar controller should give you a light on the box.

Next I connected the solar cables – positive first as it is always live in daylight – to the solar controller / regulator. Now my controller had a light saying it was charging.

Then I checked the voltage coming from the controller to the leisure battery – I was getting over 13 volts! It works! I used a dedicated wire directly to the battery rather than using the chassis as it seemed to keep the regulator a little happier with its lights, I don’t know why! 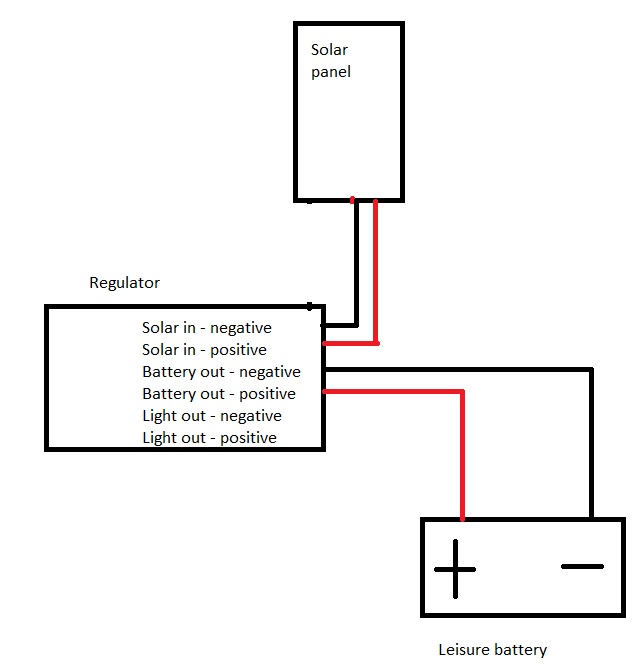 Take the “Light out” positive and negative terminals and use those to power your leisure items – DO NOT run anything directly from the leisure battery, then the controller can shut off power if the battery gets low. Erm, that’s it

Now I have a solar panel permanently on the roof, always charging from dawn until dusk even on the move. The regulator means that even with the engine running and the split charge working, we do not over charge the leisure battery and it works even under the car port in the winter keeping that battery going until spring time.

Total cost of solar system £160. Cost of replacing the leisure battery every year £120. Saving on electricity per night at a camp site is up to £10 per night. This system seriously pays for itself in no time.