This is how I did it. Your implementation may be better than mine, no warranty is offered, given or implied, ensure that you get a qualified electrician to install this, the value of your system may go down as well as up. Small print – seriously, this stuff is for suitably qualified people only.

I have a second / leisure battery in my Type 2 T2 Crossover Bay Window van. It powers the fridge, some lights and the ignition side of the Propex gas heater. Since we are often touring, it made sense to charge up that battery when driving along. Using a system similar to the Westfalia T25, we made a slightly crude but effective system. 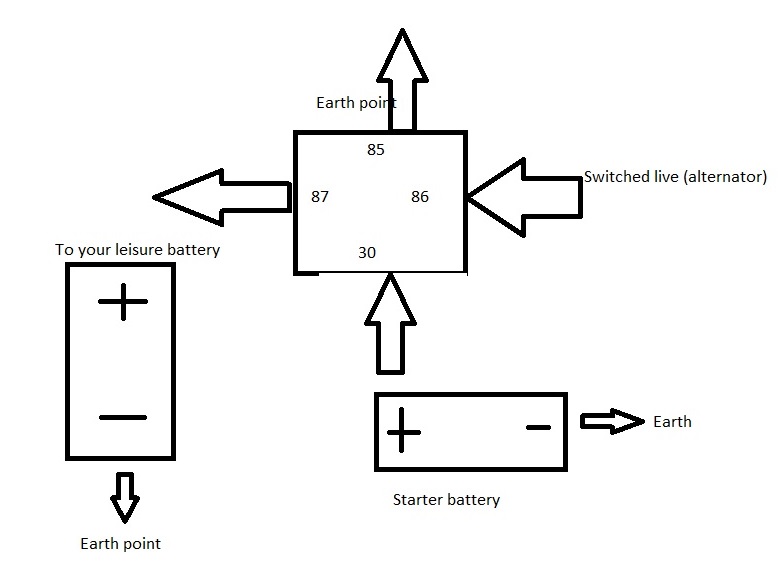 The relay arrived and has 4 terminals that are numbered in tiny writing. There are spade connectors for each one. I bolted the relay to a suitable place above the engine on the roof of the engine bay.
Spade terminal 85 was wired with about 4 inches of cable to the same bolt I was using to attach the relay so now we are earthed for the relay (battery earth is direct from the battery).
A new heavy wire went from terminal 87 to the positive terminal on my second / leisure battery to receive power when the system is live.
A new heavy wire went to terminal 30 from my main starter battery to be used to charge the second battery.
And finally I removed the spade connector from the top of the alternator. Then I fitted a piggy back connector to sit in between that wire and the top of the alternator to take a new wire “in the middle” but any method of getting a wire in there is valid. That wire only needs to be small, the same size as the wire coming from the alternator. This wire “tells” the relay when to open and start charging the second battery. This wire goes from the top of the alternator to number 86 on the relay.

Testing
With the heavy wire from terminal 87 NOT being connected to the second battery, it should be dead normally. I kept this held carefully and when the engine was running, I was getting over 13 volts as the relay is sending that down to terminal 87 from the main battery. Turning the engine off showed no charge coming through, so we had a proof of concept. That last wire was connected to the leisure battery and tightened down.

Due diligence
All wires were then cable tied neatly so that they do not flap about when you are driving along as it is difficult to monitor the engine bay from the driver’s seat.

In use
Because the relay is automated, there is no switch to move, it stops charging when the engine is off and the relay is solid state to reduce the chances of failure.

Benefits
We have not used an electric hook up for several years and can confidently arrive to a site with a full charge even with the fridge running all day.
It cost about £12 with all wiring.
I know how it works, so any changes can be done confidently.
It took about an hour, most of which was terminating the cables with mole grips as I am too mean to buy the proper crimping tool.