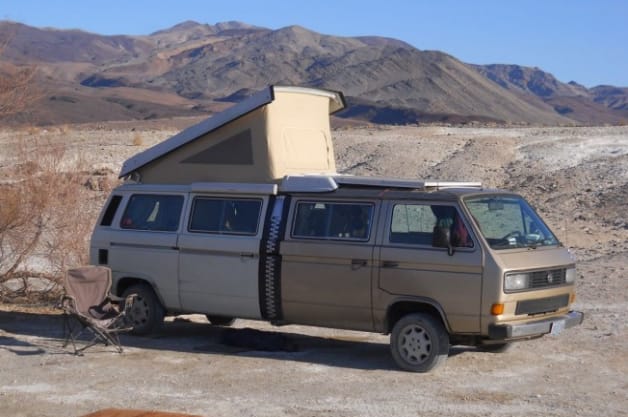 Do-it-yourselfers who made a habit of converting traditional vehicles into plug-in electrics may not have been driven entirely away by factory-made EVs. In fact, one of them will be fusing an old, stretched Volkswagen Vanagon with a new Tesla Model S powertrain, and making the world’s coolest Kombi is not as impossible a task as it might sound.
Otmar Ebenhoech knows what he’s talking about – the Oregon-based designer of electronic devices (Example A: the Zilla controller, a component found in just about every electric vehicle with a drag racing record) consulted with Tesla Motors in 2005. The man behind Cafe Electric has been working on conversions since he was 12 years old, starting with a wooden go-cart that he steered with a broomstick handle and powered with a Delco generator wired as a shunt motor.

Ebenhoech also loves the outdoors and took his first EV camping trip earlier this year in his battery-powered Porsche 914. He didn’t like that the range limitation – only 100 miles when fully charged – wasn’t enough to make it to his favorite winter camping location in Death Valley. His Vanagon-Model S idea was further inspired when he blew a connecting rod through the block while driving on Interstate 5 in his stretched-out Kombi. Even though some have expressed concerns over Mosel S reliability, Ebenhoech is confident he can get a lot out of converting a used one. As he wrote on his blog: “Sure the Vanagon brick-like aerodynamics will give less range and efficiency than the slick Model S, but I’ll get a powerful electric drive system with a huge battery, free Supercharging and an amazing dashboard to boot. No, it won’t be easy. So far it looks like the most difficult modification I’ve attempted.”
Ebenhoech found what he was looking for – a damaged 2013 Model S, 85 kWh with Active Air, black leather and jump seats – and has spent most of this week assessing the damage and thinking about how to mash the two vehicles together. This is a project we will certainly be paying attention to as time move on. For now, you can check out two videos below, one showing how he and his friends pulled the TDI engine and Porsche transaxle from the Stretch VW bus and the other showing the damaged Tesla arriving in the shop.